Gold Myrrh Absolute, the new fragrance by Carolina Herrera, is a rare take on myrrh and a beautiful, if rather unconventional (you’ll want to chew on all that dry woodiness) gourmand perfume. We spoke with its creators, Veronique Nyberg and Alex Lee of Mane, and asked the same old questions — in hope of getting all the right answers. 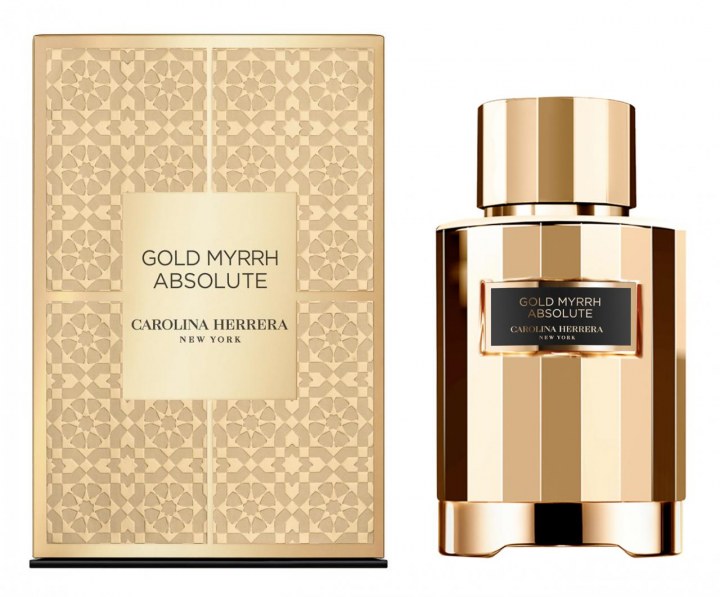 Do you remember the initial brief given to you to create Gold Myrrh Absolute?

V&A: To be honest, we started working on this project long before we were briefed. What we did was analyze what might be the next opus, the next chapter of the Eastern Treasures collection. We researched Middle Eastern perfumery, its practices and essences, the Carolina Herrera customer and his or her interpretation of luxury, and the olfactive notes that had not yet been explored in the collection… Instead of a brief, the concept of Gold Myrrh Absolute was born out of earlier research which we used to develop the first fragrance sample. We remember perfectly the day we presented it to the Carolina Herrera team: they loved it. And they loved it unanimously, which is something that does not happen often. They liked its strength, its power, its addictive and opulent scent, the way it reminded them of gold. In fact, all the later adjustments that we made were all aimed at enhancing these sensations.

“The way it reminded them of gold” — how did you get that particular feeling?

V&A: We selected the main ingredient very carefully, and we knew that myrrh was the right approach to take. The myrrh that we extract in our company Mane is of very high quality, you should see and smell it in its purest form, with the full range of yellow shades: it really resembles gold. That is why we selected it as the base note. Myrrh gives the perfume a golden, shiny and luminous quality, it infuses the formula with depth and color.

How long did you work on this perfume?

V&A: Around one and a half years. It’s not just about loving the formula: afterwards comes a period of time when you need to live with it and experience it personally. You need to digest it and understand how it behaves, how it evolves on the skin, and this requires patience. We tested it every day to see if it worked or not, we wore the perfume to test it. What’s more, we can confirm that the Carolina Herrera team wore the fragrance extensively too. They kept asking us for more samples!

Did you create many versions before finding the final shape of the fragrance?

V&A: The first step, and it was a very important step, was the fact that the Carolina Herrera team really liked the initial idea. This was also the start of the brief we mentioned previously: they asked us to get the fragrance much closer to the concept of gold. It had to be more opulent and powerful. First and foremost, Gold Myrrh Absolute is constructed as a Middle Eastern fragrance, and it needed to have a solid and coherent identity. Most of our tests (and we did a lot of tests) focused on perfecting the fragrance, just like a diamond. It had to be polished and shaped to make it more opulent and appealing, and it had to be aligned with the bottle and the name that had been chosen.

Could you tell me a bit more about the creative process of the juice? What steps did you follow?

V&A: When we started working with myrrh, which is the backbone of the fragrance and a multidimensional note, we thought that combining it with vanilla might be an interesting idea. Vanilla is addictive and has become one of the most expensive and exclusive ingredients in perfumery. It reinforced the opulence and the luxury that we were looking for to replicate gold. The next step was to link these two base notes, adjusting them and connecting them at a technical level through licorice and cacao notes that intensified the addictive aspect. We also needed a contrast, something that would invite you to smell the fragrance over and over again, and we needed to increase the longevity of the perfume and its power.

So, the contrast was key to this fragrance?

V&A: Yes. The Carolina Herrera team said that the perfume had to open itself up and breathe much more, and they were right: if you smelt it, it seemed intense, yes, but it was missing that magical touch linked to sillage. We really struggled to achieve it: each time we tried something new, either we lost the addictiveness or the essence of myrrh, or we obscured the vanilla effect. Eventually, we found black pepper (specially extracted through sustainable Jungle Essence technology), and it was our salvation. It was the perfect link between all the other ingredients of the perfume: it added freshness, energy, and the contrast and impact needed to give the formula a twist and make it unique.

Which olfactive family does this fragrance belong to?

V&A: Gold Myrrh Absolute is an oriental gourmand fragrance. It’s oriental because of myrrh and vanilla, and gourmand because it contains aromas that everyone has smelt or tasted: licorice, vanilla again and cacao as powdered chocolate, which actually evokes the addictive smell of coffee. Myrrh also smells slightly like this, but we did not want to convey coffee with this fragrance.

What about the sustainability of the ingredients? Are they responsibly sourced?

V&A: Yes, they are. One of the things that attracted us to myrrh was that the one we use comes from a desert in the north of Namibia, in southwest Africa, and is extracted by the Himba people. The women from this community mix it with animal fat to create a reddish paste which they spread on their skin, as part of their beauty ritual and because it functions as an insect repellent and sunscreen. Myrrh is fundamental to their daily life, so it is important to buy the harvests from them at a fair price. At Mane, we support them by offering them financial security and promoting their ingredient in many beauty products. The company has been a longstanding stakeholder in their country: for many years we have helped to improve the social conditions of the producers and their families. We want to take care of them. We have developed educational programs (funding a new school that benefits 600 children), health (building a local hospital) and food safety (with a community rice granary). We also promote initiatives to protect their biodiversity. As a company, we have a strong commitment to reforestation: everything that is harvested has to be replanted. As perfumers, the idea that you can create fragrance while indirectly helping a community is wonderful. It is an added extra that we give to everyone who buys Gold Myrrh Absolute: each time someone tries it and smells its ingredients they will be supporting an essential cause.

As for the spirit of Carolina Herrera, how did you translate it into this formula?

V&A: The philosophy of the house is all about sophistication and the tradition of craftsmanship, but with a twist of extravagance that makes the designs even more impressive. We create our perfume according to that mindset: starting with extraordinary notes, we use our creativity to compose them in a modern way. And the final fragrance is always a surprise. These are scents that had never been smelt, they cannot be compared to any fragrances previously created, and they generate a magnificent impact “at first sniff”.

Gold Myrrh Absolute is the newest chapter of Eastern Treasures, a collection that pays tribute to the ancestral perfumery of the Middle East. From your point of view, what can this fragrance offer to the men and women who wear it in 2021?

V&A: One of the greatest achievements of Middle Eastern perfumery is influencing the world to appreciate the value of fragrance more, the power of scent to make each person stand out from the rest. Gold Myrrh Absolute does this: whoever wears it will not go unnoticed, they will stand out. It’s very likely someone will approach them and ask: “What perfume are you wearing?”. Furthermore, this perfume will please many — it’s not about gender, it’s about olfactive love at first sight. It offers a sensorial dimension and a mystical side, an invitation to escape, to feel free — a feeling that is intrinsic to the Carolina Herrera DNA. Besides, its gourmand facet evokes smells and tastes that are etched in everybody’s memory.

What has it meant to you to work on the Herrera Confidential collection?

Veronique Nyberg: I had already collaborated with the house on the creation of other fragrances, but Gold Myrrh Absolute is the first Herrera Confidential perfume that Alex and I have crafted together. It’s our first baby in the family! (laughs). Here we have been able to explore and understand the Middle Eastern market, to understand it in depth, and maybe for this reason the project has also been a challenge: we have had to live up to these expectations and build a perfume as powerful and unique as the ones created there. Furthermore, it also had to be tied to a color. How do you make something that smells of gold? How do you translate a smell into the opulence associated with gold? It has been a real learning process, and a very enjoyable one: we were supported by the whole Carolina Herrera team from Barcelona and that helped us all move forward in the same direction.

What have you learned about the universe of Carolina Herrera during this project?

V&A: The most beautiful thing has been observing from the inside what the world sees from the outside: this is a house that prioritizes quality and creativity, with the objective of designing beautiful things through passion and optimism. This can be seen in the garments, the perfumes and the team’s mindset. They are always smiling and laughing! Working on this fragrance we have really experienced what they call, in Spanish, alegría de vivir.

Do you often experience it in your work, this alegría? Was it a good enough reason to take up work in fragrances?

Veronique Nyberg: For me, it was all about the contrast, which is essential to Gold Myrrh Absolute, it’s something that I have enjoyed all my life. Since I was a child I have done so many things related to art! I wanted to do it for a living, but I was an excellent student too, so I ended up getting a degree in chemistry. Let’s just say that when I discovered perfumery, I found that it allowed me to combine those two things — I saw I could combine my scientific background with the creative side of me that has always been my passion.

Alex Lee: I come from California, from Silicon Valley, which is a place much more focused on technology than perfumes. Honestly, I don’t know how my interest began. All I can say is that, throughout the years, my hobby became a job. I knew that I had to complete my training in the heartland of perfumery, so I moved to Grasse in 2007, studied there, then in Paris, and afterward, I did an internship at Mane, where I am now lucky to have the coolest job on earth.